Most Power BI reports contain multiple tables. These tables need to be linked together to create a proper data model. Whenever possible, this should be done using the star schema.

Most Power BI reports contain multiple tables. These tables need to be linked together to create a proper data model. Whenever possible, this should be done using the star schema.

First, let's see what a data model according to the star schema looks like. As you can see in the picture below, this data model contains one fact table and four dimension tables which are all linked to the facts table. It doesn't matter how many dimension tables you have, the star schema is considered best practice and in the following article, you'll learn what you have to look out for. 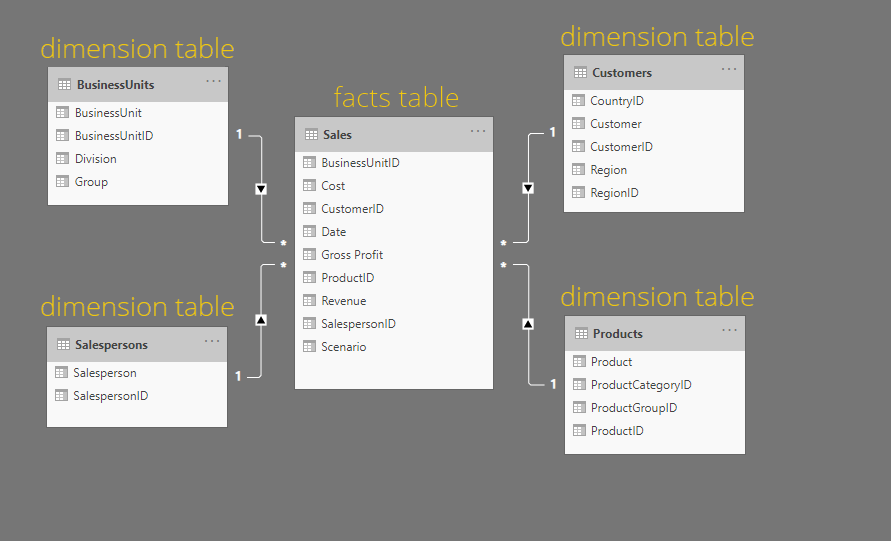 1. What is a dimension table?

Let's take a closer look at the BusinessUnits table from our data model: 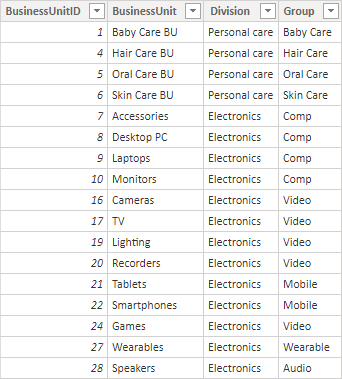 As you can see, every BusinessUnit has one unique BusinessUnitID and belongs to one Group. Each Group is allocated to a Division. When only looking at the Electronics Division, this is the organizational structure this table represents.

So each row in the Sales facts table contains a BusinessUnitID and since we have linked BusinessUnitID between the tables, filtering is possible. Some more information about filtering will come later in this article.

What kind of fields are included in a dimension table?
A dimension table contains a field with a unique ID. In our example, this would be the BusinessUnitID. On top of that, dimension tables can contain other descriptive fields such as the description belonging to the ID (BusinessUnit) and the groups the unique ID belongs to. Other fields that could be added to this example are the name of the person that is responsible for the BussinessUnit, the location of the head office per Group, or something similar. But you would never include the number of sales or other transactions in the dimension table.

This table shows individual sales transactions (facts). Of course, you can have multiple transactions on the same day, for the same ProductID, CustomerID, etc. This is why fact tables are usually longer (contain more rows) than dimension tables.

⚠️  Power BI can deal with very long tables but might slow down when you have tables with a lot of columns. So it's best to have narrow tables. That's also a reason why you want to create a star schema and not just have one single table with all the information.

You can also see that the table contains values for Revenue, Cost, and Gross Profit. These are facts that are normally aggregated and filtered according to a field from a dimension table.

What kind of fields are included in a dimension table?

The facts table includes facts or transactions but even more importantly it also contains a key to each of the dimension tables in order to create the relationship between the tables and be able to slice and dice the data using the fields from the dimension tables.

As you can see, every dimension table's unique ID is linked to the facts table.

Also, note that the filters are always pointing away from the dimension table and towards the facts table.

To avoid using a filtering dimension from the facts table, it's considered best practice to hide them in the report view.

If you can follow all these rules, you have a perfect star schema.

Sooner or later you might face a situation where a perfect star schema isn't possible anymore due to the high complexity of the data in your report. This is also fine, however, you should always try to be as close to the star schema as possible.